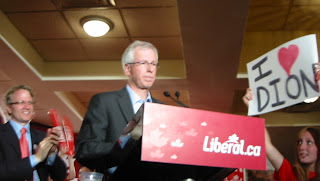 Kennedy warmed the crowd up and Dion set them on fire criticizing the vacuous campaign performance of Stephen Harper. “Harper has done nothing and intends to do nothing to assist Canadians who are anxious about losing their jobs and their homes.” With the team of Flaherty, Clement and Baird transported to Ottawa after they ruined Ontario’s economy, Harper encourages Flaherty as he says to investors that Ontario is the last place you should invest,” said Dion.
"Tory times are tough times because they don't respect the government. Tory times are tough times because they don't know how to use the government to help Canadians," emphasized Dion. Focussing on the incompentence of Harper and his non-existent team, Dion was firing on all cylinders as he challenged: "It's about the economy, Stephen."
Dion challenged Harper to reveal his plan and his ideas for Canada and the crowd ate up the rhetoric. They chanted after each announcement that Dion proposed the Liberals would undertake to lead a United Canada into the 21st century. Dion focussed on manufacturing, immigration, agriculture and the economy – exactly what the audience wanted to here in the manufacturing centre of Southwestern Ontario. Thousands of jobs have left this area in the last two years and people are frightened about the future.

The crowd of about 250 party faithful including the local MPPs Deb Matthews, Chris Bentley and Kahlil Ramal, gathered on a moment's notice and left on a high note - can’t expect anything more for a partisan rally.

Having seen Dion seven times over the last two years, I would say that today was one of his best performances ever. He was witty, challenging toward Harper and exceptionally forthright when pushing the crowd to step up to elect these Liberal team members.

There’s a good chance of painting London completely RED in this election.
Update from Twitter: Liberal Tour is saying the number was 400...my number of 250 includes those in the room where Dion was speaking and where I was during the event. Turns out there were many more people in the hall and outside. Liberal Tour's number is probably closer to the mark.
Posted by Deb Prothero at 10:45 PM Labels: debate, Dion, Harper, Liberals, London