A silent time is coming to a close. Having spent the last few weeks in a mostly meditative state shutting out the electronic world with minimal exception, I feel that I have come to the anniversary of Caleb’s death with an open heart, open ears and a deeply felt sombre respect for the man that captured my heart and mind.

Caleb Schaber was in touch with his self in a way that few of us ever reach or even dare to seek. The path he walked was of his choosing. He knew who he was and what he wanted to communicate. Caleb had crystal clear vision of injustice and railed against it in words, art and action. This did not make him popular in all circles and although he cared not for popularity sometimes he found himself lonely for human companionship. His social graces were occasionally hidden under the crush of post traumatic stress yet he was one of the most sensitive and caring individuals I’ve ever met.

Drama and theatre were often the tools he used to express or draw attention to injustice or moments of profound need for creativity in our sad world. Witness: the monolith project in Seattle (January 1, 2001), April Fools Day events on University Ave., his Fountains of Presidents at the Blue Moon Tavern and his campaign for Mayor. Art, writing, music, theatre and protest all rolled into one volatile soul, Caleb affected people wherever he went.

To carry on his memory and honour his spirit, I have decided that, in future, my own campaigns against injustice will divert from my serious side and I will stretch to find the fun, the drama or the aesthetic of the message in ways that Caleb could appreciate. We shared a railing against injustice but he was more effective in gaining attention and a response than I have ever been. Although my campaigns have eventually made change possible, I admired deeply Caleb’s sense of fun, drama and his immediate impact.

Last night I spent several hours in silent meditation on the beach of my childhood, mere yards from the home where I was molested, a place where I often felt panic. That beach was my refuge as a child and seemed an appropriate spot to put the horrors of my childhood to rest along with remembering Caleb, the man who expected me to ask more from my life. Caleb insisted on intellectual and emotional honesty and challenged me to overcome the old tapes that held me back, the warped attitude that allowed me to continue in an abusive but secure relationship. Caleb infused me with the confidence and courage for this path.

The skies were grey and moody, the waves noisy and crashing, the sunset dull and uninteresting - perfect circumstances for focussing on thoughts of Caleb’s death. I spent the time of contemplation at the beach camped out burner style – pack it in, pack it out. I ate foods Caleb had introduced to me, burned candles that last burned in his company, I listened to music he chose to mark a special moment for us, I read Robinson Jeffers, I wrote a letter to Caleb in a book of memories I’ve created, I gathered potential art materials from the detritus on the north shore of Lake Erie, I recorded the sound of the waves for future meditation, I wore black - sexy black not my usual librarian black, I wore the scarf he gave me from Peshawar and I wrapped my faux fur around me against the cool wind. Then I gathered driftwood to burn and sent my thoughts to his spirit as I sprinkled a few ashes from our Frog Pond memorial last year on the flames so he knew his friends were there too.

Caleb Schaber lived big and he chose drama for his departure too. His spirit lives on in many of his friends and burns brightly in my heart. I couldn’t get through all this current court drama without the courage he infused in me. I wish he had stayed to witness the outcome of his love but I know that I channel his energy every day. I will be forever grateful for the short time we spent together and for his many friends who I’ve come to meet and know.

Have you chosen how you will honour Caleb’s memory and his gift to you? His spirit will live on in your actions and memories too. Help me to keep him alive in this crazy, mixed up, sad world – rail hard against injustice just as he would, be sensitive and care for each other but now let’s find the outrageous, the creative, the drama and the fun in life again. 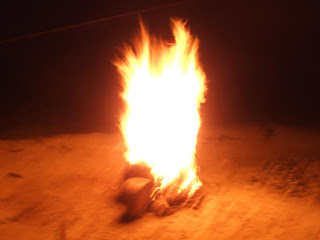 I don't have a single bad memory of Caleb. I still haven't felt like I can dig through the box of letters, pictures & postcards stashed away. Sometime I will, though. His postcards were particularly awesome (Graceland!).

He was never anything but kind and honest with me, and that's what I will always remember. It's just not right that he's gone. That feeling will never go away. The U-district, Wallingford, & Ballard are fairly haunted with Calebisms, and every time I throw someone out of my house for refusing to reveal their dental plan, it will be in Caleb's honor :) Also every time I drink a 40-ouncer in a movie theater (ouch, he was so nice not to make fun of me for not being able to drink like a sailor. I still remember the movie "The Madness of Kind George" Can I tell you what it was about? Hell, no!).

Lots of memories, and I feel so cheated that I can't tell him what they meant to me.